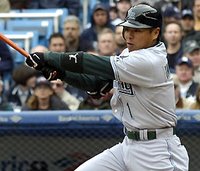 In the second inning of the Devil Rays vs. Yankees game, Aki Iwamura had his bat inspected by Yankees manager Joe Torre and the umpire's because they thought that the end of the bat was too flat. Iwamura ultimately struck out to end the inning. In the next inning, the Devil Rays responded asking the crew to inspect Alex Rodriguez's bat, which was also taken away. Both bats will be inspected by the Commissioners Office. The Yankees are currently beating the Devil Rays 7-2 in Ian Kennedy's major league debut.