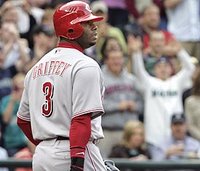 There is no question that the Braves will be looking for an outfielder this offseason. Their younger players are not ready to take over an everyday role and bringing in a superstar for the outfield just does not make sense when other upgrades need to be made. The Cincinnati Reds have a pretty crowded outfield and by trading Griffey would open a space for top prospect Jay Bruce. In return, the Braves could send Scott Thorman, a couple prospects and then they would have a legitimate center fielder who will hold the spot until their younger players are ready to take over. Griffey did grow up around Braves baseball because his Dad was on the team, so he is familiar with Atlanta. New GM Frank Wren has said he does not plan to throw a big contract at anyone, further backing up the scenario that Griffey could be on his way to Atlanta. "I would say that going strong in the free-agent market would be our least likely alternative," Wren said. "I say that just because, with the young players we have coming [in the farm system], it just wouldn’t make sense to go sign somebody for four, five, six years when we have what we think are better players on the horizon. With that being said, the free-agent market probably doesn’t make as much sense as a trade. The trade market is probably the most likely way we’ll fill center field." Now that Mike Cameron has tested positive for stimulants and will be out for the first 25 games, I do not expect the Braves to have much interest. The Braves would not only get half the contract paid for by the Reds, but would get an outfielder nearing the Hall of Fame who will fill seats for the next several seasons. Other possible destinations for Griffey include the Tigers, Cubs, and Mariners.