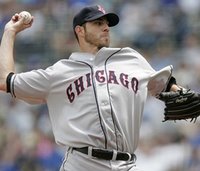 The Angels traded shortstop Orlando Cabrera to the White Sox for pitcher Jon Garland. Garland, who has been shopped around for nearly three seasons, will be a solid pitcher in the two spot while Cabrera will be an upgrade in the middle infield and probably end Danny Richar's time at second base. Cabrera is in the final year of his contract making 9 million while Garland is making 12 million dollars. This means you can expect to see John Danks and Gavin Floyd in the rotation for the White Sox in 2008. I think this is a great move for the Angels who now have room for Brandon Wood and add Garland, who should benefit from the dimensions on Angel Stadium.