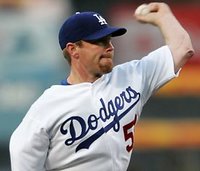 The Houston Astros have named three targets: Luis Castillo, Scott Linebrink, and Randy Wolf. We have known about their interest in Linebrink and Castillo but Wolf is something new. Wolf was not bad this year for the Dodgers, but had a season ending injury which shut him down in July. However, he went 9-6 with a 4.73 ERA and 94 K in 18 games. If he had a full season, he probably would have put up thirteen to fifteen wins. The Astros are smart to be interested despite recent struggles from their veteran pitchers. Wolf will probably want a guaranteed contract, for about 5 or 6 million dollars. I think it is a good move for the Astros. They get a veteran pitcher who could give them 10+ wins. As for Linebrink and Castillo, both of them would make the team better and maybe put them in contention for a spot in the playoffs, assuming some of their young pitchers can bounce back. Other than the Astros, the Phillies and Twins are also interested.