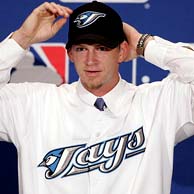 The Blue Jays landed A.J. Burnett in 2005 giving him a five year deal, worth 55 million dollars. However, the deal included an opt clause that gives him the option to walk. So it makes sense that if he does well, he will opt out and look to make more money on the market. The Blue Jays realize that and now plan to entertain offers for the right hander. Burnett was 10-8 with a 3.75 ERA, and has been fairly consistent with the Blue Jays during the past two seasons. I'm not sure what the Blue Jays would get for him because he is owed so much, but if they agree to pay some of the contract, I'm sure they could land a couple prospects and a pitcher. I expect the Diamondbacks, Reds, Phillies, Cardinals, and maybe Dodgers to be interested, among others. The Cardinals tried very hard to sign him but refused to give him an opt clause, so he signed with the Blue Jays. This is definitely a win-win for Burnett. Not only might he get traded to a contender, but if he is not happy where he is, all he has to do is stick it out for one more year and then he is on the market again.