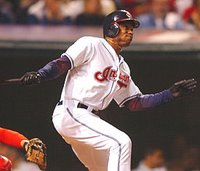 The Braves are eyeing pitchers now that they can negotiate with other players, and plan to meet with Tom Glavine tomorrow. This comes as no surprise and they should get a deal done in the next couple of weeks. I'm sure he will ask for a deal similar to Greg Maddux's, maybe a little higher. They have also talked with Carlos Silva initially, but may pass if his price rises too high. They were scouting him back in July, which makes me think they may offer him a contract. I expect the Mariners to jump in on Silva. They are desperate for pitching and will probably sign for a Gil Meche-type deal. The Braves do have Jair Jurrjens, so I do not expect them to go for Silva hard, but expect them to look into a center fielder. At first, I was thinking Mike Cameron. But because of his recent stimulant allegation he is probably returning to San Diego. I haven't talked with anyone from the Braves, but one NL GM said it wouldn't surprise him if they expressed interest in former Brave Kenny Lofton. He believes Lofton would give them the option of bringing one of their younger players up to be mentored by Lofton. It also gives them the option to trade him to a contender like he was this past season. Another option is utilty man Alexei Ramirez, who can play outfield and some infield. In the next couple weeks, we will find out where the Braves stand on some of the issues, and where new GM Frank Wren plans to take the team.