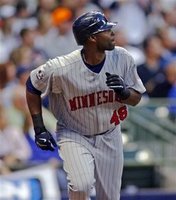 I did not see this coming. Late Wednesday night, the Angels agreed to a five year deal, worth about 90 million dollars. "We shocked the world. Now I'm an Angel. I'm going to hopefully finish my career as a Halo, and hopefully get about three [World Series] rings out of this thing." This signing definitely puts the Angels ahead of the pack in the AL West, and it seems they will only get better. By signing Hunter, it makes sense that that they might give Brandon Wood a shot. They got the big bat they need, and have the option to go and get Miguel Cabrera still. Hunter, 32, won his seventh consecutive Gold Glove Award, batting .287 with 28 homers and 107 RBIs in 160 games. With this signing, they will probably move Garrett Anderson to DH, if not trade him. Corner outfielders are hard to find this offseason and Anderson would make for a good one year stopgap. He batted .297 with 16 HR and 80 RBI while making only two errors. While a deal is pending a physical, the White Sox, Royals, and Rangers were the most interested in signing Torii Hunter.

Whats Next for the Angels?: Well, new GM Tony Reagins has made the big splash that the Angels have been trying to make for years. Now, I expect them to go hard for Miguel Cabrera. Hunter gives them some protection so they can trade some prospects, and I see them looking at a deal like this. The Angels would trade Ervin Santana, Howie Kendrick, Chris Bootcheck, Sean O'Sullivan, and Jeff Mathis for Miguel Cabrera. You can then move Figgins to second, Cabrera at third and have arguably the best offense in the American League. That is a high price to pay for the Angels, but I think that would make them better than the 2002 team, when they won the World Series.

UPDATE: It is possible we could see Matthews added in the trade so they would not lose too many prospects, according to FOXSports.com.