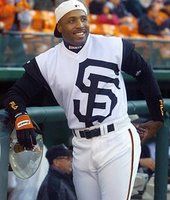 Former Giants Outfielder and Homerun King Barry Bonds has been charged with perjury and obstruction of justice, according to CNN.com. "During the criminal investigation, evidence was obtained including positive tests for the presence of anabolic steroids and other performance enhancing substances for Bonds and other athletes," the indictment read. The grand jury has been working vigorously for the past several months to complete this indictment, and I'm sure this will draw more interest than the Mitchell Report. The indictment charged Bonds with lying when he said he didn't knowingly take steroids given to him by his trainer. It is always innocent until proven guilty, and although some disagree, that is my stand on the whole thing.