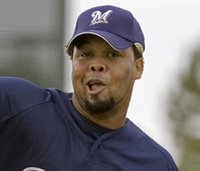 According to Ken Rosenthal, the Reds are in serious talks with closer Francisco Cordero. Cordero is believed to be talking to three clubs, the Brewers, Reds, and an anonymous team, but the Reds are the front-runners. The Reds relievers struggled last season and signing Cordero would definitely make them better. Cordero is seeking a four year deal, worth about 45-50 million dollars, and after the season he had, he deserves it. Cordero was 44-for-51 for the Brewers while going 0-4 with a 2.98 ERA and striking out 86. Something could get done as early as today, but will probably get done sometime next week, unless a surprise team jumps in like the Angels did with Hunter.

UPDATE: THE REDS AND CLOSER FRANCISCO CORDERO HAVE AGREED TO A FOUR YEAR DEAL, WORTH 46 MILLION DOLLARS.