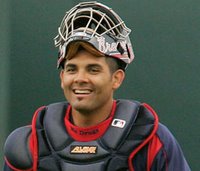 According to MLB Rumors Correspondent Thomas Reiss, Brewers GM Doug Melvin plans to look at some of the free agent catchers available, suggesting that they plan to tender Johnny Estrada. There are several catchers available, and the most likely replacements seem to be either Paul Lo Duca, Michael Barrett, or Yorvit Torrealba. Estrada was not terrible for the Brewers this season, batting .278 with 10 HR and 54 RBI. Some of the other catchers have the potential to be better, but were not this season which makes me think Melvin might be saying this to stir up interest in his catcher. There are no replacements that are major league ready and he will only be making about 4.2-4.5 million dollars next season, a lot less than what the free agents will be getting. But he is coming off elbow surgery and risk of him not performing both at the plate and behind the plate makes some think that the Brewers will overpay to make sure that will not happen. Furthermore, the scuffle he had with manager Ned Yost did upset some in the Front Office which could also lead to his departure. For now, I suspect that they will hold on to him. He is a veteran catcher who would continue to work with some of the young pitchers now on the staff and is on schedule to be ready for Spring Training 2008.