Share All sharing options for: Brewers Now Desperate For Pitching 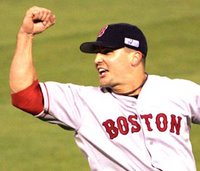 A source tells me that now the Brewers have lost both Francisco Cordero and Scott Linebrink, they are desperate to replace them. The have Derrick Turnbow, but he proved that he could not close this past season so they probably will not try again. I could see them go after former closer Keith Foulke. He said he was planning a comeback and for the Brewers to dish him a one year, incentive laden contract might turn out to be a plus. As for other relievers on the market, David Riske, Ron Mahay, Kerry Wood, and LaTroy Hawkins are all solid additions to the the bullpen. Although they may be expensive, they must find ways to upgrade. They are loaded with starting pitching and that could lead to a trade for a bullpen arm. He did that with Dan Kolb and lost pitching prospect Jose Capellan, who is now fighting for a job with the Tigers. I see the Brewers looking to the Blue Jays for help. They had a solid bullpen and may be willing to give up pitchers like Jeremy Accardo or Scott Downs for a solid pitcher and minor leaguer. Accardo was 4-4 with a 2.14 ERA, 30 SV, and 57 K while Downs was 4-2 with a 2.17 ERA and 57 K. One would be a huge upgrade in the pen and not a big loss for the Blue Jays as they would like to add another starting pitcher.