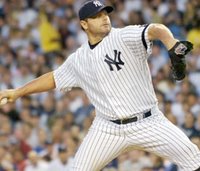 The Astros traded away closer Brad Lidge to the Phillies, opening their closer spot to probably Chad Qualls. Qualls did very well as a late inning reliever and he will probably continue to be effective. Clemens, who is leaving the Yankees to "retire" and become a consultant for the Astros, could take over the closer spot next season. I know it does not sound likely, but it is possible, and it would make for an interesting situation. Clemens was 6-6 this season with a 4.18 ERA and 68 K in 99 innings of work. I think he could pitch again, and being a closer would take some stress of his arm. Furthermore, he could work with young pitchers and hitters on the team. However, there are two big obstacles holding this scenario back. One, is Clemens willing to close? Probably not, which makes this seem unlikely. Two, how much money would he want for one year? Probably another pro-rated contract for about 20 million dollars. Personally, I think he would be effective, and would love to see him do this, but he is probably finally calling it a career.

Let me know, do you think Clemens would be a successful closer?