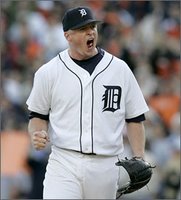 The Diamondbacks are looking to improve their pitching, and it starts with finding a solid pitcher. Hernandez to free agency so adding two pitchers seem reasonable. I think that there is a good chance they will acquire They will probably lose LivanErvin Santana, especially because the Angels are looking to trade him. Another possible pitcher who they have expressed interest in is Jeremy Bonderman. I think the Tigers would be interested here, despite losing Joel Zumaya last week. They traded away two solid prospects and could use two more for the future. Their outfield will need a new face soon so we could see them trade for Aaron Cunningham and Brooks Brown or Esmerling Vasquez. For now it is just speculation, but Bonderman was 11-9 with a 5.01 ERA, but has picked up 28 wins between 2005-2006, so he is consistent and successful in the American League. We will know more as this GM Meetings go on, but I suspect something happening following the meetings.

Gonzalez on Radar?: Although Luis Gonzalez would like to return to the Dodgers, he is probably on his way out. I'm not sure where the interest is coming from, but it appears the Tigers would like to bring him in. He is a lefty, who batted .278 with 15 HR and 68 RBI, but he will be 41 next season so a one year deal would only work for them.