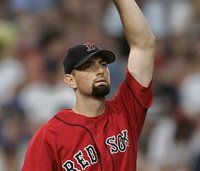 Although they said they wouldn't, the Diamondbacks are exploring the market hoping to find a cheap pitcher to fill the void. The names that come up are Matt Clement and Bartolo Colon, both of whom have been stricken by injury over the past couple of seasons. However, the interest in Matt Clement seems more realistic because he is looking at a one year deal, worth about 2 million dollars. He has been pitching successfully with no pain over the past two months and plans to be ready for Spring Training. One reason why the Diamondbacks might be turned off to this idea is because they already have Randy Johnson, who is coming off back surgery. The Diamondbacks appear to be giving up on Tony Clark, who has become very stubborn in contract negotiations, according to sources. They have talked with Mark Sweeney's agent, who also represents Matt Clement. Sweeney would not be a bad bench replacement. He is a solid pinch hitter with experience at Chase Field.