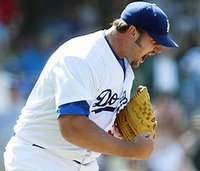 Over the past twenty-four hours, the Brewers have been in talks with several teams, according to major league sources. He told me that Dodgers GM Ned Colletti has talked with Doug Melvin of the Brewers about a possible swap, but nothing has gotten serious as of yet. I expect the Brewers to be looking at either Joe Biemel or Jonathon Broxton, so it will cost them. The Dodgers are looking for an outfielder and could ask for Bill Hall in a trade. That would open it up for Tony Gwynn or another replacement. Also, the Brewers are loaded with pitching, so the Dodgers could try to acquire Manny Parra or Carlos Villanueva. I think a trade like this would work for both sides. The Dodgers have some questions marks in their rotation and would benefit from a young arm. The Brewers need to improve their bullpen because if they don't, they will have trouble contending in the NL Central. Other than the Dodgers, the Brewers have reportedly talked with the Blue Jays, Diamondbacks, Nationals, and a fourth unknown team.