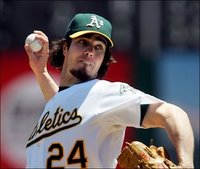 The Athletics have acknowledged that their minor league system is thinning and are looking for solid, young upgrades. Beane worked his magic this year acquiring Jerry Blevins, but he has yet to show his full potential. I think the players he is looking to trade are Dan Haren, Joe Blanton, and Dan Johnson. Haren would be a great fit for the Rockies. They need a proven pitcher and have solid, low-level prospects who are just a couple years away. I do not see many one-for-one type deals, but more Beane digging into the low-levels to find three or four prospects. Beane always finds the best time to trade his players, which is when teams are desperate to find upgrades after failing to make a splash on the market. Trades coming in early December or early January seem most likely, and I think they will dangle one, if not all three of the players. Other teams that could jump in on the sale include the Mets, Diamondbacks, Indians, White Sox, Marlins, Astros, and maybe Cardinals, but only if they fail to make a solid upgrade on the market.