The First Pillar Has Fallen

Share All sharing options for: The First Pillar Has Fallen 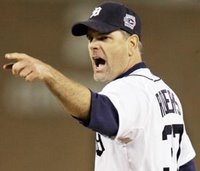 The man who established himself as The Super Agent, Scott Boras is now on a slight decline. Today, Kenny Rogers dropped his agent Scott Boras and said he would represent himself in negotiations. Although he loses just one client, who is nearing retirement, this could signal the beginning of players choosing other agents instead of Boras, who although will land you a big contract, will draw negative attention to your negotiations. Now that he is on his own, it makes even more sense that he will return to Detroit. However, both the Rangers and Mariners have made contact with him, but all offers made were declined by Boras. Now that he is on his own, I expect him to get a deal done with the Tigers probably the week following Thanksgiving.