Share All sharing options for: Fogg Files For Free Agency 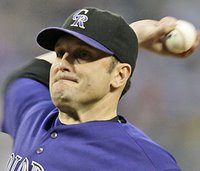 Once a joke of the Pirates organization, Josh Fogg has turned his career around and is set to cash in on the open market. In two seasons with the Rockies, he was 21-18 with a 5.21 ERA and 187 K, but his postseason success makes him more valuable because not only did he out pitch Jake Peavy to make it in, but he won two games with an ERA of 0.75 before getting rocked by the Red Sox in the World Series. Nonetheless, pitching in the clutch is huge and Fogg did it successfully several times. Not only that, but Fogg had a 9-4 record against teams with winning records this season. I expect him to get a deal in between Joel Piniero and Jason Marquis. Maybe a three year deal, worth 18-20 million dollars. For teams interested, the Orioles tried very hard to land him back in March and we could see them make another run for him. Fogg had success with the White Sox his rookie season and could return there if they look for a bottom end of the rotation type guy. I expect the Orioles to be all over him. Not only desperately trying to get him back in March, but Andy McPhail watched him pitch for several years down in Pittsburgh and knows his repertoire and what he is capable of. There has been no indication the Rockies want him back, suggesting they will look to sign a more effective pitcher.