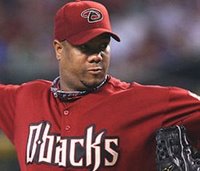 This afternoon, I talked with a Special Assistant of the Mets and he gave me an idea of what the Mets will do this off season. First, let's clear the speculation: The Mets are not going after Alex Rodriguez. But they do have interest in some of Boras' clients. I was not told who, but if I had to speculate I would say Eric Gagne, simply because the Mets are looking for an upgrade in their bullpen. As for other free agents, they are nearing a deal with Paul Lo Duca, but there was no indication that the Mets were close to a deal with Luis Castillo. I assume a deal will be announced at the earliest tonight, but probably tomorrow morning. They also plan to explore the market for a starting pitcher, and I believe they are not ruling anyone out just yet. I think the Mets will look at free agent pitcher Livan Hernandez, who is clutch in the playoffs and can rake up innings. He is also the half brother of Mets pitcher Orlando Hernandez which plays into the chemistry factor, something most people overlook. Through trades, all I heard was that they have had talks with teams. As for which players, or what they are asking for, it is unclear. But I assume that they are shopping Mike Pelfrey and Carlos Gomez. The Mets payroll is right around 115 million dollars, but I expect it to go up because I see them looking at White Sox pitchers Jon Garland and Jose Contreras.

Kaz Matsui and Kosuke Fukudome Cubs Update: I have had a lot of questions about this one. The Cubs are supposedly interested in Kaz Matsui, but I have not been able to confirm that report. From what I have heard, the Cubs plan to offer a three year deal to Matsui and play him at second and short. However, they still plan to play Mark DeRosa five days a week at second, third and in the outfield. This means that Ryan Theriot's time might be cut some, but Piniella is known for working in his players into games. As for Fukudome, the Cubs are "very interested" and plan to make an aggressive offer to him. Personally, I think they will look to sign Matsui in the next day or so and use him to lure Fukudome. Beyond that, they will work to sign Kerry Wood while exploring the market for other free agents, possibly Francisco Cordero. I have heard there is some interest in Hitoki Iwase, but again, nothing has been confirmed just yet. Despite the pending ownership sale, the Cubs plan to be fairly active.

What will the Mariners do?: The Mariners are in an interesting spot. They have made it known they plan to upgrade their pitching, and that is why I think might land Carlos Silva. They are looking into pitchers Jon Garland, Dan Haren, Dontrelle Willis, and Roy Oswalt, and will probably have to unload some of their top prospects to bring them in. As for other trades, they will probably look to trade Richie Sexson, maybe to the Rangers for Vicente Padilla to swap bad contracts.

What about the Rockies?: The Rockies are probably on the verge of losing both Matsui and Torrealba. They plan to talk with Michael Barrett this week, and may look in house for a second baseman. It is possible we could see Marcus Giles go to Colorado, or maybe Japanese infielder Tomohiro Nioka. As for a front of the line starter, they have been connected to the Athletics because of their solid farm system. They have several solid pitchers, who could land a pitcher like Dan Haren or Joe Blanton if packaged together. They have also been shopping around Brian Fuentes, but only to gauge his interest around the league.

If you would like an update on your team, just leave a comment and I will find out whatever I can.