Ian Stewart At Second Base?

Share All sharing options for: Ian Stewart At Second Base? 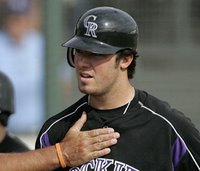 The Rockies plan to keep Garrett Atkins after toying with the idea of trading him to make room for top prospect Ian Stewart. This is a good move on O'Dowd's part to hold on Atkins, who keeps the core players together in hopes of another run at the World Series. Stewart is young, but has never played second base at the professional level and it may effect how comfortable he is while trying to adjust. They probably will not be able to keep both Torrealba and Matsui before the Wednesday deadline, especially because there is so much interest in both players. They will probably go after Michael Barrett if Torrealba leaves which could turn out to be one of the best signings in the off season. I do not think they are ready to trade either Atkins or Stewart, so starting Stewart at Triple-A playing him at second base might be an option. Once he gets comfortable playing there and is still hitting well, then call him up and ease him into the role. We will see what the Rockies do, but this is what I think.

Let me know what you think they should do with Ian Stewart.

Yankees, Posada Close to Deal: "We're really close," Posada told reporters. "It's not about the money. For me, it's the best situation." My guess is it is a three year deal, worth 40-45 million dollars with an option for a fourth year.