Share All sharing options for: Interview with Justin Upton 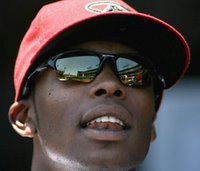 Earlier this week, I had the privilege of talking with Diamondbacks right fielder Justin Upton. Upton was called up in August for the Diamondbacks and quickly emerged as the starting right fielder. He played well in the playoffs and all signs point to him because a very good player. Upton began the year at High-A and finished the year as the starting right fielder for the Diamondbacks, which shows how talented he really is. I want to thank him again for donating his time for this interview. I also want to thank Mike Dillon of Reynolds Sports Management for setting this up for me.

ELI: Coming into high school, do you remember what you wanted to work on most?

JUSTIN: Not much, I still just wanted to have fun. As I got older, I worked on my swing a lot, and having a consistent approach at the plate. At the time, I was a shortstop. So I also wanted to get better there.

ELI: You started the year strong with the Oaks, did you see the call up coming?

JUSTIN: At High-A, I started off strong and was hitting the ball well. I went on a streak for a couple weeks and I stayed hot, so I thought I had one coming. Also, towards the end the coaches starting joking more about a call up so it was not too much of a surprise.

ELI: Is it hard to believe that you started the year at Single-A and are now with the Diamondbacks?

JUSTIN: Yeah, I was playing well at Double-A and was just hoping that I would be a September call-up. But when I got the call and they told me, it was sweet, it was crazy.

ELI: Your first hit came against Derek Lowe, can you take me through that at-bat?

JUSTIN: Well, he is a sinker-ball pitcher so what I was trying to do was get the ball up. I was lucky enough to get one up in the zone and drive it because usually you are lucky to get one high up in the zone.

ELI: How about your first homerun off of Tom Gorzelanny?

JUSTIN: Well, I didn't know the stadium too well so I couldn't tell if it was gone but I hit it pretty good. I wasn't sure, so I took off out of the box and when I saw it was gone, I just saw everyone laughing in the dugout.

ELI: When your brother [B.J. Upton] started playing outfield, did you give him any pointers?

JUSTIN: Nah. He is very athletic and versatile and he has good coaches down there too so he didn't need my help.

ELI: Both of you guys are very fast, but who is faster?

JUSTIN: I probably have better times in the book. But there are two types of fast. He is taller and longer, so he runs a bit smoother than me, but I get going faster.

ELI: What has been your most embarrassing moment since being called up?

JUSTIN: Probably the rookie hazing. It was pretty embarrassing, I had to dress like a baby in Colorado.

ELI: The first playoff game against the Cubs was a big one. What was that like for you to play and pick up your first hit?

JUSTIN: The playoffs are a different atmosphere. I made sure I didn't let the surroundings get the best of me, got myself feeling good, and cut out the crowd. It was a lot of fun.

ELI: I know this was a big problem in some clubhouses, but who was better: Kanye or 50 Cent?

ELI: Now that the season is over, what is next?

JUSTIN: Well, I have had a couple weeks off, and I'll probably start some heavy lifting next week.

ELI: What do you plan to work on this offseason?

JUSTIN: Well, you are always trying to get better. I'll work on my swing, and becoming more flexible.

JUSTIN: Yes and No. I'll hop on MLB.com every once and awhile. I'll turn on Sportscenter, and they always have the updates so I'm pretty well updated.

ELI: If you could rob one person of a homerun, who would it be?

JUSTIN: Oh man, it would probably have to be brother, B.J. That would be really cool because he is my brother and that is something not everyone gets to do.