Share All sharing options for: Interview with Ryan Theriot 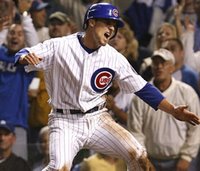 This afternoon, I had the privilege of talking to Cubs shortstop Ryan Theriot. Theriot made his first appearance with the Cubs in 2005, and has emerged as the shortstop of the future by his performance since making it. Being a Cubs fan, I was really excited to talk to him, especially because I have followed him since he got up to Double-A. I want to thank him for giving me his time for this interview. I also want to thank Josh Goldberg of Beverly Hills Sports Council for getting this done for me, I really appreciate it.

ELI: Growing up in Louisiana, did you have a favorite baseball team?

RYAN: Probably the Cubs and the Braves. Mostly, because of the channels we got, WGN and TBS. I'd get home from school and be able to watch the Cubs in the afternoon and then watch the Braves later.

ELI: What was it like playing baseball at LSU? What part of your game was most improved by your time there?

RYAN: Playing at LSU was great. When I got there, they had won four straight National Championships, so they were the powerhouse of College Baseball. It was an incredible place, a great spot to grow as a player. I think my maturity level grew a lot while I was there. Being able to play in front of 8,000 people, where it was sold out, helped me grow as a player. That was the first time in my career that I was in the public eye, and I think I matured really quick because of it.

ELI: Can you take me through the at-bat when you broke up Mark Prior's no-hitter? Have you talked with him about it?

RYAN: Oh yeah. I remind him about it all the time. The third baseman took about three steps in before he [Prior] threw me a sinker. I was able to chop it right over the third baseman's head. When I got over to first Prior stared me down; it was all downhill for him from there.

ELI: In 2006, you were up and down with the team. Was it hard to adjust or get comfortable moving up and down all the time?

RYAN: Yeah. But I think it proved to me that I belonged there. You know, I was able to get over that it was the MLB-it was my league, it was where I wanted to be. I think [GM] Jim [Hendry] handled me very well. I did not have too much pressure on me because of him.

ELI: People always say success in baseball is all about chemistry, what is it like having former college teammate Mike Fontenot in the clubhouse everyday?

RYAN: It's awesome. Not many people can say that. We play the same positions we played back in college, where we won a World Series. Like you said, it is mental, and I think it is great.

ELI: You've been forced to switch numbers several times over the past couple seasons, are you finally set with number 2?

RYAN: I was actually thinking about switching to number three for next year. I've made a couple changes. I never wanted to be number 55, I always wanted a single number. So I moved to seven, then to three, and then back to seven. But DeRo [Mark DeRosa] took that so I got two. I think I will stay with number 2, unless we acquire Derek Jeter this off season.

ELI: People always say Cubs fans are one of a kind, what do you think it is about them?

RYAN: They have been great for me. They are always encouraging me, always positive, I've always enjoy Chicago because of them. One big thing is the know baseball. They understand when a player has four good at-bats, but can't get on base. Or when you hustle out a ground ball, they applaud effort. Some cities would boo you for some of the things Cubs fans understand.

ELI: When I tell people that you had 28 SB, they didn't know it was that high, do you think you have a good read on pitchers or just an itch for finding the right pitch to go on?

RYAN: I think it is a little of both. I think the first thing is that you want to steal bases. I probably should have had stolen more bases, but I wasn't given the green light as much as I wanted. But when I get on first or second I am usually looking to steal.

ELI: I was in Cincinnati to see the final series where you guys clinched, were you surprised by how many Cubs fans were there?

RYAN: Not at all. I fully expected them to be there. There are few ballparks around the country that have more of their fans than Cubs fans.

ELI: Can you think of one pitcher you have had constant success against?

RYAN: Not really. There are teams I feel comfortable with, or stadiums I like hitting at. I really like Cincinnati. Not because of their pitchers, I think I just see the ball better there. My first series there I was able to get a bunch of hits and I think I just feel more comfortable because of it.

ELI: Now I have heard different things, but who is better: Kanye or 50 Cent?

RYAN: Yeah. But I think Lil' Wayne tops them all. I am a big Southern Rap guy.

ELI: Besides Wrigley Field, do you have a favorite stadium to play at? Clubhouse?

RYAN: I like Milwaukee a lot. The temperature stays the same, the stadium looks nice. For clubhouses, I like Atlanta, Milwaukee, and San Diego is nice. Yeah, San Diego is really nice, better than Wrigley.

ELI: If you could bat against one pitcher in the past, who would it be?