Share All sharing options for: J.D. Drew to Chicago? 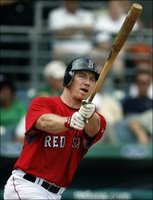 The Cubs have an opening in their outfield and are looking for a left handed power hitter. They are assessing the situation with Felix Pie and will probably look to trade Jacque Jones, despite a potent second half. The Red Sox may look to trade Drew after putting up low power numbers, and the Cubs make most sense because Drew has had success in Chicago, and his contract favors the club he is with. Drew is set to make fourteen million dollars annually till 2011, but the club may opt out of the final two seasons if he spends 35 days on the disabled list in either 2009 or 2010 with injury related to his right shoulder, or if he finishes the season on the DL and cannot play outfield the following season. If Pie struggles, the Cubs could move Drew to center and play Matt Murton in right field. Personally, I am against this trade. I believe if the Cubs platoon Pie and Jones in center, and play Murton in right or go after free agent Kosukue Fukudome, it would keep a spot open for top outfield prospect Tyler Colvin. Colvin will probably start the year at Triple-A, but won't be with the club till 2009, barring injury.