Jones Back In Atlanta?

Share All sharing options for: Jones Back In Atlanta? 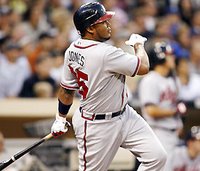 The Atlanta Braves have taken the first steps in moving closer to signing Tom Glavine, and according to Tim Tucker, they have more money to spend. Could this mean that they will re-open talks with longtime Brave Andruw Jones? His agent, Scott Boras, really hurt his reputation as an agent with Alex Rodriguez which will probably hurt the rest of his clients talks. Also, with Jones coming off a bad year the Braves would be able to get him at a reduced price. This past season, Jones, 30 hit .222 with 26 HR and 94 RBI, numbers that will probably get him a five year deal worth 80-85 million dollars. However, the Braves think very high of Jordon Shafer and Brent Lillibridge, which would suggest that they will put their money towards better things. I'm sure Jones' price will go up now that Alex Rodriguez is going back to the Yankees, only because teams are now more desperate. Personally, I consider the Giants the front runner because they are so desperate for an offensive upgrade, but do not rule out the Dodgers, Padres, and maybe Angels.