Share All sharing options for: Kaz Matsui To Astros? 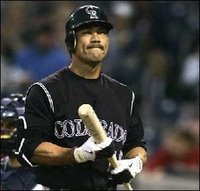 Now that Luis Castillo is off the market and the Cubs are being blocked to make moves by the sale of the team, it appears that Kaz Matsui is heading to the Astros. According to Tracy Ringolsby of the Rocky Mountain News, the Astros are in negotiations with Matsui's representatives and you can expect something to get done next week. Meanwhile, the Rockies are happy with the way Jayson Nix has been performing and plan to give him a shot at second base. However, if the Astros bring in Matsui, we could see the Astros look to trade Chris Burke, who the Rockies were interested in last year. He is a good utility player who can play some infield and outfield. But if they cannot work a trade for Burke, they might look to sign Tadahito Iguchi. They have had success with Japanese players and Iguchi would probably have success in Colorado, where the air is thinner. In other news, the Rockies are far apart in talks with Torrealba, and it is still possible that he will go to the Marlins, Brewers, or Blue Jays. The Rockies are interested in Michael Barrett, who is looking for about five million dollars annually. I expect talks to really heat up after the holiday so stay tuned.