Share All sharing options for: Kei Igawa To Padres? 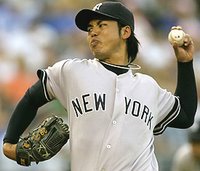 It appears that Andy Pettitte will retire opening a spot for Ian Kennedy in the rotation. Although it is not official, I am hearing that is what he is leaning towards. Kei Igawa is the sixth man in the rotation as of right now and will probably move to the bullpen. However, many teams are inquiring about Igawa which makes me think they will trade him. Igawa is making four million a year and will not be a free agent until 2011, so he is worth taking a chance on. The Padres inquired about him in August, but could not work anything out. A couple teams I expect to be interested include the Diamondbacks and Twins, who are both in need of pitching, and the Mariners and Marlins. Igawa was not impressive this season going 2-3 with a 6.25 ERA and 53 K in 14 games, but he is capable of being successful. It would only cost them two low-level prospects and force them to pay for some of his contract.