Luke Scott To Be Traded?

Share All sharing options for: Luke Scott To Be Traded? 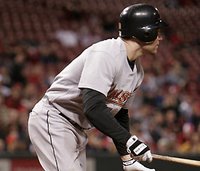 Although Luke Scott put up decent numbers for the Astros this year, they are displeased with his first half numbers and his work ethic, and are looking to trade him. Scott, 29, batted .255 with 18 HR and 64 RBI in 132 games. Not bad, but it could be better. There are several teams that could use an outfielder, but I have heard Scott has been struggling down in Venezuela, further lowering his value. Trading Scott would open up a spot to land a big time outfielder, probably Torii Hunter. But what the Astros need to do is focus on pitching and finding a middle infielder. I've been saying it for months that the Astros should go for Tadahito Iguchi for their second base spot, and then look to sign a proven pitcher. The Astros have money to spend, and could definitely use some upgrades so they can compete with the Brewers, Cubs, Cardinals, and improving Reds. As for Scott, I expect the Twins to be interested because of he bats from the left side, along with the Marlins, White Sox, Orioles, and maybe the Cardinals.