Share All sharing options for: Mariners Front Runners For Kuroda 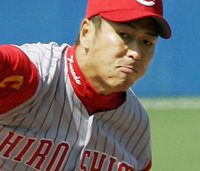 According to MLB Rumors Correspondent Shane Shapiro, the Mariners are the front-runners in the race to land Japanese pitcher Hiroki Kuroda. Kuroda, who is 103-89 with a 3.69 ERA in eleven seasons in Japan, is also being pursued by the Cubs, Rangers, and Red Sox, among others. However, Shapiro has learned that negotiations are starting to get serious, and that the Mariners are preparing to go to Tokyo to meet with Kuroda himself. The Mariners are desperate for pitching after flopping with Jeff Weaver. I have learned that they are in the running for Carlos Silva, and are looking into a trade that would bring Vicente Padilla to the Mariners. Kuroda would be great in the three or four spot. He would have catcher Kenji Johjima to work with, which would help while crossing the language barrier, along with veteran All Star Ichiro. I don't expect anything to get done until the Winter Meetings, only because of the holiday and because I am sure they will guage other teams interest. But for now, the Mariners are definitely leading the pact.