Share All sharing options for: Matsui Decision Coming This Week 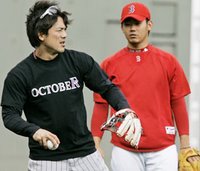 According to sources close to Kaz Matsui, Matsui plans on making a decision this week on who he will sign with. There are three teams that have reportedly made offers and they are the Cubs, Rockies, and Astros. However, the Astros and Cubs reportedly have offered more money than the Rockies so it looks like he is on his way out. Matsui batted .288 with 4 HR, 37 RBI, and 32 SB this season with the Rockies, and is just 32. The best second baseman, Luis Castillo, was resigned by his Mets so the top free agent second baseman is probably Matsui. The Cubs have shown interest in him because not only are they looking for a speedy infielder, but they would like Matsui to try and lure Kosuke Fukudome to the Cubs over any other team. Another reason Matsui is attractive is because he is a switch hitter, with playoff experience. The Astros middle infield is one of the weakest in the league so they will definitely be looking to upgrade. A solid pickup right now would be Jeff Keppinger. Keppinger is a utility infielder with the Reds who showed decent power in the second half of the season. He would be inexpensive, and would definitely help. On the market, they could look at Tadhito Iguchi, but they have already shot that down. I don't consider any team to be a front-runner at the moment, so expect to hear something in the next day or so about a possible agreement.