Share All sharing options for: Matt Kemp To Orioles? 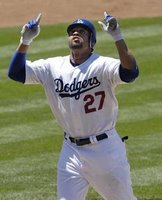 The Dodgers have one of the most stocked farm systems in baseball and are expected to be big players in the races for Dan Haren and Erik Bedard. The Orioles seem to be the most interesting team because they are in need of a change, and could use some fresh faces to reestablish themselves in the AL East. I'm sure they will look to sign Bedard before they shop him, but if they could land Matt Kemp, Clayton Kershaw, and Chin-Lung Hu, three major league ready players, you would think they would do something like that. Especially because they will get more prospects from whichever team bites on Miguel Tejada. Kemp is being pursued by a lot of teams since the Dodgers put him on the market including the Padres, Twins, and Marlins. Don't expect anything to happen in the next week or so. The Orioles do plan to try and sign Bedard before shopping him, so I do not expect anything to get serious until mid-December.