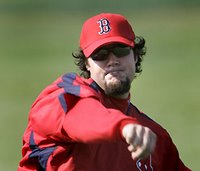 The Red Sox appear content on letting Eric Gagne walk as they work hard to sign Mike Lowell. Gagne, who struggled with Boston after being traded from the Rangers, is set to be a late inning reliever. This season, Gagne was 4-2 with a 3.81 ERA and 16 SV. I do not know if he would benefit from playing with the Mets, who, like the Red Sox, are in the media a lot, but a switch to the National League might help. He did have solid defense behind him and good run support, but struggled on the mound and made it known that he was feeling the pressure. Other than the Mets, the Giants, Rangers, Cubs, and Orioles have expressed interest. Because he is represented by Boras, you can expect Gagne, 31, to get a three year deal worth 7-10 million dollars annually.

Although Boras represents Alex Rodriguez, the Mets do not plan to talk with him about that. They do plan to also talk about the availability of Kyle Lohse, who is looking for a deal similar to Ted Lilly's last year, which was a four year deal, worth 40 million dollars. Lohse is worth no where near that, and would probably get a deal half that if the market was better. However, since he is leading the pack, he can pretty much set the pace.