Share All sharing options for: Mets Looking For Right Fielder 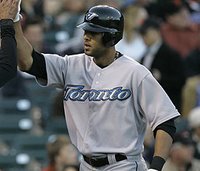 According to Steve Popper of The Record, Omar Minaya is in the market for a right fielder. I do not think he is looking to make a big splash but it would not surprise me if they inquire about Kosuke Fukudome. They will probably settle for Jose Guillen, or maybe Geoff Jenkins. I could also seem them look at Rondell White, but only if all else fails. However, Minaya knows the value of prospects these days and may shop them around for a proven outfielder or pitcher. It is likely that we will see Lastings Milledge go to Oakland for Joe Blanton while they will shop Phil Humber for an outfielder, maybe Alex Rios or Jason Bay. Personally, I think they should address the pitching situation first, but Minaya is desperate to make a winning team any way he can.

According to MLB Rumors Correspondent Brady Yu, the Pirates are now out of the running for reliever Yashiko Yabuta, leaving the White Sox, Royals, Indians, and Devil Rays in contention. However, now that the White Sox and Torii Hunter are moving closer to striking a deal, my money is on the Royals landing him. Trey Hillman is familiar with his stuff and I think he feels that he will prosper most there because Hillman will know where to use him.