Mets Near Deal With Torrealba

Share All sharing options for: Mets Near Deal With Torrealba 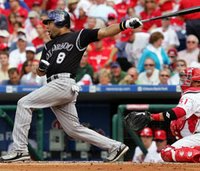 The Mets are closing in on a multi-year deal with Mets, according to several sources. Although it has not been confirmed, I have heard that the Rockies have dropped out of the running and are setting their sights on free agent Michael Barrett. The deal is believed to be a two year deal, worth 10-12 million dollars, with a possible option for a third year. At first, the club seemed content with bringing Lo Duca back. But since Torrealba expressed his interest in the market, the Mets quickly signed his backup Ramon Castro, and are moving towards a deal for him. You could say that Castro did better than Torrealba, despite not playing everyday. Torrealba batted .255 with 8 HR and 47 RBI while Castro batted .285 with 11 HR and 31 RBI in 52 games. The Mets probably see the value in Castro off the bench because he is a good situational hitter, and is good at holding runners. And Torrealba has a full season under his belt with playoff success, so it is hard not to give the job to start. I think this is a great 1-2 punch for the Mets, who is are just getting started in upgrading their team. So with Torrealba leaving, I expect the Rockies to go after Michael Barrett, and their seems to be genuine interest. As for Lo Duca, he will find work. Probably with the Padres or Marlins, most likely with the Marlins. The catchers will probably go rather early as Torrealba sets the price for others, but we will see how it all plays out.