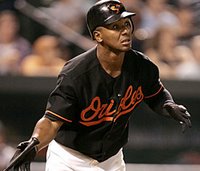 The Although the Orioles have not indicated if they will trade Melvin Mora or not, it seems the Phillies would be interested in trading for him if he is available. I think it would be a good fit for both teams. Phillies have solid prospects and could easily trade one or two of them. I could see them trading Jayson Werth, and a low-level pitching prospect for him. Werth would fit nicely in the in the Orioles outfield. Jay Payton struggled in the outfield for the Orioles and bringing in Werth, who is just 29, would give them a solid left fielder for the next several years. And trading Mora would move Huff to third base until top prospect Bill Rowell is ready. However, if Scott Moore proves he can play third base successfully he might get a shot, but he has yet to prove so. They have Luis Hernandez, who can play several positions on the field, who should get a shot to play everyday. I expect the Orioles to resign Corey Patterson to play center field, but from there, maybe they will trade Miguel Tejada.