Share All sharing options for: Nationals After Dukes, Again 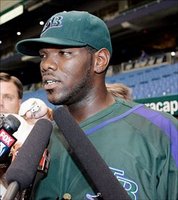 The Washington Nationals are actively pursuing troubled Devil Rays prospect Elijah Dukes. Dukes has been the topic of many trades because he would bring back something in return, and his off the field scuffles are upsetting the team and the Front Office. Dukes would fit nice in Washington. He would be able to step into a leading role with the team and benefit from Manny Acta's style of play. Not only that, but he is playing in the Dominican Republic with Nats third base coach Tim Tolman, and is being scouted by Nats manager Manny Acta. Furthermore, Jim Bowden is known for giving troubled stars another shot. He signed Dmitri Young and Ronnie Belliard, both who had trouble in the off season or the season before. Dmitri Young was released by the Tigers because he was struggling and had some attitude problems while Belliard had some off the field problems. Bringing in Dukes would help the team and could revitalized his troubled start in the MLB. It would also clear his off the field image and a change of scenery, although it is not to a contender, would allow him to start fresh and grow into the ball player he is capable of becoming in a low media environment.