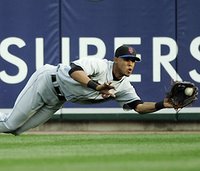 The Washington Nationals have tried hard to land young prospects Mike Pelfrey and Carlos Gomez, according to MLB.com. The Nationals would love to get younger, and those are the perfect players to try and land. However, what could the Nationals offer? Omar Minaya drafted Chad Cordero when he was with the Expos, but they have Billy Wagner and it does not make too much sense to bring him in that role. Nonetheless, Pelfrey would be great to add to the rotation while Gomez to the outfield. Both have solid potential and would benefit going to a low market town in the same division. I think that talks will slow down for now and in a month pick up again around the Winter Meetings. Both the Mets and Nationals are looking to improve and at the Winter Meetings, they can gauge their progress and meet again to discuss a deal. Last season with the Mets, Pelfrey went 3-8 with a 5.57 ERA in 15 games, not impressive for being considered a top prospect, but there is still time. I expect one of them to be moved, probably Gomez because there are other options in the outfield right now.