Share All sharing options for: Number 27 Will Haunt Girardi 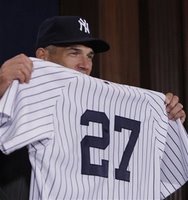 I was very happy to hear that Joe Girardi would be named the next manager of the Yankees. For those of you that do not know, I am from Chicago and as I got into baseball, Girardi was emerging as the Cubs catcher. Believe or not, I even ran into him at a local establishment in the town I live in while he was visiting a friend, so I do have some personal connections to him, even though it was brief. But for some reason, I do not understand why he chose the number 27. He only puts more pressure on himself to win a World Series in 2008. I think it is perfectly appropriate to say we will win a World Series, but to go as far as put the goal on the back of your jersey, that is a little much. Maybe it is an aggressive plea to land a big free agent who is longing for a World Series, maybe Torii Hunter? I just think that he may be "jinxing himself" for the upcoming season, maybe even his time as Yankees manager. Now maybe nothing will happen and they will eventually win a World Series under Girardi, but if they don't, I'm sure some skeptics will say it was because he decided to don the number 27. Nonetheless, I fully expect Girardi to run a successful team, even if Rodriguez is not back with the Yankees. He does extensive research on all the teams he faces, and is familiar with the Yankees because he has been around them for the past several seasons. Now that Girardi is manager, it makes even more sense that they will go for Miguel Cabrera, who was managed by Girardi back in 2006. More will be determined in Spring Training when we can see the upgrades the Yankees have made, but I think Girardi should have reconsidered the decision to wear number 27.