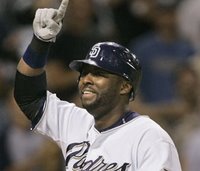 The Padres have said that they expect both Milton Bradley and Geoff Blum leave, which could indicate that they will pick up negotiations with outfielder Mike Cameron. Cameron is the obvious choice in center, and they will probably go with Hairston-Headley in left. I wouldn't rule out Kosuke Fukudome though. They nearly signed him out of high school and GM Kevin Towers has not denied his interest. As for Bradley, it is possible to see him go to the Cubs if they miss out of Fukudome. They nearly acquired him before he left the Athletics, and Bradley could play right field. The Cubs are looking for a left handed bat, and Bradley is a switch hitter who hit .307 batting lefty. Aside from that, the Padres are exploring a trade for Matt Kemp, along with some other possibilities. I think if they could should add a free agent bat solely because a platoon at both left and second may effect the lineup, but an upgrade can always be added as the market unfolds. They are expected to go after Jason Kendall, who is seeking a one to two year deal.

UPDATE: According to MLB Rumors Correspondent Tim Wallace, the Padres are preparing an offer for Geoff Jenkins. So there you have it, they will look to a corner outfielder after all.