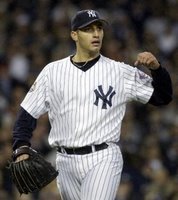 According to sources, Andy Pettitte has declined his option and is now a free agent. "I have spoken with Brian Cashman, who has reiterated what Hank Steinbrenner said about the Yankees wanting to give Andy all the time he needs to decide about next season," Pettitte's agent, Randy Hendricks, said Monday in an e-mail to The Associated Press. "Accordingly, we are declining to exercise the option for 2008 and Andy will declare free agency in order to free up a roster spot for the Yankees." Pettitte is the new Roger Clemens, meaning he will wait till May on whether to pitch the following season. I expect him to come back, just not with the Yankees. He is a big fan of Joe Torre and Don Mattingly and I think his comments saying it was Yankees or nothing were generated before he became manager. Torre could definitely lobby Colletti to sign Pettitte, and I think they will inform Pettitte of their interest, but give him all the time he needs to make up his mind. Pettitte was 15-9 with a 4.05 ERA for the Yankees this year, including 11-3 after the All-Star break. The Yankees have gotten weaker, and this now might lead to the departure of Jorge Posada, maybe even Mariano Rivera.