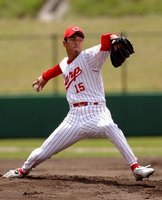 Now that the Phillies have missed out on Curt Schilling, and it appears that Mariano Rivera is close to signing his new deal, the Phillies have set their sights on Japanese pitcher Hiroki Kuroda. But who has not set their sights on Kuroda? Since he filed for free agency Monday, a dozen teams have come out and stated their interest. The Dodgers, who have Takashi Saito, a close friend of his, are interested, the Phillies, Cardinals, Rockies, and Red Sox have also said they are initially interested. Kuroda, 32, is 103-89 with a 3.69 ERA in 11 seasons with the Carp. He has a good sinker ball, and his fastball has solid downward movement in the mid-90s that would benefit a lot of stadiums. I suspect him to command about 8-11 million dollars annually for three or fours years. Despite the Cubs moving Ryan Dempster to the rotation, I still consider them the front-runner. They went very hard for him last year and certainly will again, so it makes sense that he could sign there. However, the Mariners Kenji Johjima would work nicely with Kuroda behind the plate while Ichiro is there as well. Even the Red Sox, if they were interested, because Okajima and Matsuzaka could help him adjust to pitching in the big leagues. Kuroda requires no posting fee, so come next week teams will start bidding like crazy for his services.