Share All sharing options for: Phillies Looking For Outfielder 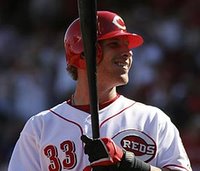 Since the Phillies traded Michael Bourn and are resigned to letting Aaron Rowand walk, they are scanning the trade market for an outfielder. "We're still keeping an eye on Aaron, but I'm not sure he's a realistic piece for us right now," Amaro said. "If we're not in a position to bring back Aaron or someone of that ilk, we'll be looking for a fourth or fifth outfielder." The Phillies have not named any potential replacements in the outfield, but we can speculate that it won't be a big name outfielder because the Phillies do not have the minor league depth to trade for someone like that. The first name that comes to mind is Coco Crisp, who the Phillies have showed some interest in. He would be great to slot in center field and isn't a free agent till 2009, when he has a eight million dollar club option for 2010. Crisp batted .268 with 6 HR, 60 RBI, and 28 SB this season, but with Jacoby Ellsbury showing that he can handle the everyday job, Crisp becomes expendable. After Crisp, it is possible they could make a run at Josh Hamilton of the Reds. Hamilton was a nice surprise for the Reds, but their outfield is crowded and they may look to trade him. Although Cardinals manager Tony La Russa is against it, they could swing a deal for Chris Duncan. Duncan has good power, but some scouts have compared him to Pat Burrell, who the Phillies are looking to trade too. Beyond them, I expect them to be interested in Jacque Jones, Rick Ankiel, Jason Bay, and Bill Hall.