Share All sharing options for: Piazza Likely Heading To Japan 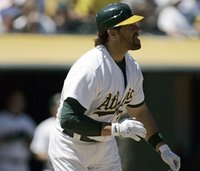 Mike Piazza is looking for a job back east but has yet to find a team interested. I am sure he will talk to teams looking for a DH, but it does not seem any are interested. Piazza can no longer draw fans like he used to, so there is little revenue coming in by signing him. Also, his power numbers have dropped dramatically and he can no longer play catcher or first base. This season, he batted .275 with 8 HR and 44 RBI in 83 games. Sources close to Piazza are reporting that if Piazza cannot find a job here, he hopes to pursue a career in Japan. He would be a huge draw in Japan because he was Hideo Nomo's first catcher and is considered the greatest hitting catcher of all time. Not only that, but it is possible we could see Piazza do well in Japan because they are not sure of his weaknesses, and also because they are not as effective as pitcher in the States. Would Piazza actually go to Japan though? I haven't heard much about Piazza and if he feels disrespected by having to turn to Japan, but I think he would enjoy success there at least for a year. I think it would also lead to better connections with Japanese baseball by having a potential Hall of Famer playing there.