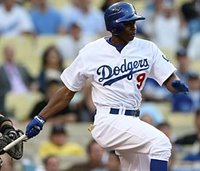 The Dodgers are apparently shopping Juan Pierre in hopes of finding a team willing to take on his contract. Pierre signed a five year deal worth 44 million dollars and after batting .293 with 0 HR, 41 RBI, and 64 SB, they will look for someone with more power. I would not be surprised if teams were interested in Pierre, but only if the Dodgers took on much of the contract. From what I am hearing, the Dodgers are calling around to half a dozen teams hoping that they will discuss it more at next week's Winter Meetings, which I will be attending. It would not surprise me to hear the Padres, Reds, Orioles, and Brewers on the list of teams interested. The Padres are looking for an outfielder and could trade for Pierre to roam center field. The Reds, who are managed by Dusty Baker, a favorite of Pierre's, could offer up Josh Hamilton and another prospect or two and land Pierre. The Orioles and Brewers are both looking for center fielders and do have the young pitching that would entice the Dodgers. I do not think Pierre will be traded, bu we will find out more at the Winter Meetings.