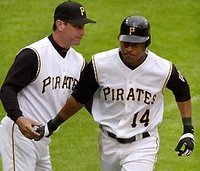 The Pirates are set to name John Russell their new manager, according to sources close to negotiations. Russell, who has managed the Phillies Triple-A team the past two seasons, was with the Pirates as a third base coach before Lloyd McClendon was fired. He is familiar with the organization, but was not exactly loved in Pittsburgh because of his poor judgement with runners being sent home. Personally, I think the Farrell is the better choice, but since he was not interested, I guess they feel that someone already familiar with team is best. An announcement is expect Monday, and if the team can improve, hopefully he will be able to hold the job for the next several seasons.