Share All sharing options for: Podsednik To Padres, Cubs? 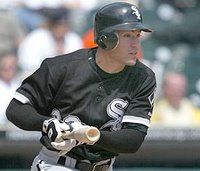 Scott Podsednik was designated for assignment today and because he has enough major league time, he can declare for free agency if claimed. He will probably be non-tendered next month anyways but expect the Padres and Cubs to be interested. The Cubs were interested in him last season but couldn't work something out. It does not seem that Mike Cameron is going back to the Padres and they could look to bring Podsednik in and platoon him with someone else. The Cubs have shown interest in Cameron so they might go after him if the price is right. Podsednik struggled with the White Sox this season batting .243 with 2 HR, 11 RBI, and 12 SB, but has had some success in the past. Other than the Padres and Cubs, I expect the Rockies, Pirates, Orioles, and Nationals.