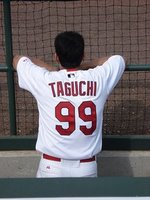 So Taguchi's option was declined by the Cardinals the other day, ending his tenure with the team. Taguhi, 38, batted .290 with 3 HR and 30 RBI as the Cardinals backup outfielder, but his speed and defense makes him much more valuable. The Red Sox are finding ways to bring in Japanese players as a bargaining chip when negotiating with other Japanese players, including Hitoki Iwase. Beyond Ramirez, Ellsbury, and Drew, the Red Sox do not have much for their outfield. Bobby Kielty was not impressive as a backup and they could use a more effective one. A one year deal worth two million dollars would fit nicely with Taguchi, who can play all three outfield spots and communicate with pitchers Daisuke Matsuzaka and Hideki Okajima. According to MLB Rumors Correspondent Brady Yu, one Red Sox executive was intrigued by the idea, but would not confirm interest in signing him. We will know by the end of the month if they are interested or not, but I think this is a perfect match.