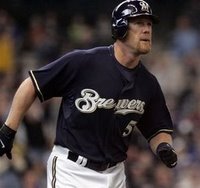 A source close to Geoff Jenkins has told me that the Padres have extended him a two year deal, worth 16-20 million dollars. The deal supposedly has an option for a third year, but I have not been able to confirm that. This does make sense though because the Padres met with Jenkins yesterday for several hours, which would suggest they hope to get a deal done by the Winter Meetings. Jenkins batted .255 with 21 HR and 64 RBI and is not a liability in the outfield yet. He has struggled at PETCO Park batting .234 with 2 HR in 12 games, but has seen success at other parks in the NL West. Personally, I think the Padres should go after Andruw Jones. They have the money to spend, he has the potential to hit 30 HR, and is very reliable in the field. The Padres plan to look in house for second base while will probably look to add a pitcher, and another outfielder.