Share All sharing options for: Report: Red Sox Near Deal With Schilling 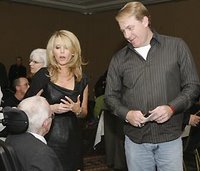 According to the Boston Herald, the Red Sox are nearing a deal with Curt Schilling. Although the details are not being released, it is believed to be a one year deal, worth about 10 million dollars, with incentives. Similar to what Greg Maddux got, just the incentives probably include innings pitched, strikeouts, and maybe an MVP or Cy Young bonus. Schilling, who turns 41 next week, went 9-8 with a 3.87 ERA this season before getting three wins in the postseason. This is a great move by the Red Sox who can now give Schilling the proper send off. Not only that, but it solves the rotation problem and sets them up with another great chance to take the division. Other than the Red Sox, the Astros, Diamondbacks, Brewers, and Cubs had all contacted Schilling expressing their interest.