Report: Yankees Near Deal With Mahay

Share All sharing options for: Report: Yankees Near Deal With Mahay 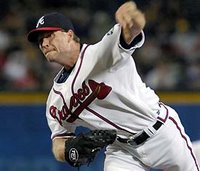 The Yankees and relief pitcher Ron Mahay are closing in on a two year deal worth about five to seven million dollars, according to one AL executive. Mahay, 36, dominated lefties and holding them to a .189 average. He will give the Yankees a lefty specialist in the bullpen who can set up for closer Mariano Rivera. He also gives them an option if Rivera starts to struggle. Mahay was 3-0 with a 2.55 ERA and 55 K and has been pretty consistent in keeping his ERA down throughout his ten year career. Despite struggling with the Cubs in 2002, he is 19-10 with a 3.87 ERA in 359 games. He has experience in the American League playing his first two seasons with the Red Sox. Although he is getting older, it only makes their pitching better by adding a lefty specialist, who is even more confident than he was after putting up solid numbers. If a deal is not reached in the next two days, expect it to be shelved until next week because of the holiday's.