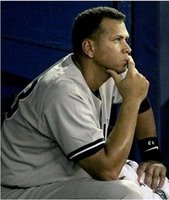 According to Peter Abraham of the Journal News, the Yankees and Alex Rodriguez have all but finalized a 10 year deal, worth 275 million dollars. Certainly a good deal for A-Rod, who not only saves face but gets a fresh new deal that he worked out on his own. I have heard different numbers, but we know that the numbers range from 22 million to 27 million annually. It wouldn't surprise me if he took a pay cut out of respect because he caused the Yankees to lose 21 million dollars from the Rangers because he opted out. For now, it is a preliminary agreement as they still work on the numbers, but A-Rod will be a Yankee for a very long time To be honest, my free agent predictions initially had A-Rod staying with the Yankees, but I changed them. I should have stuck with my gut, right? Now the Yankees need to sign Mariano Rivera, trade Johnny Damon, and work on bringing back Andy Pettitte. The Yankees are looking pretty good if their younger guys can stay healthy, and hopefully Joe Girardi can control the Yankees, who will be on a tight leash early on.

Lowell Still Coming?: It appears that Mike Lowell is on his way out of Boston. According to sources out of Boston, he has received four year offers from Boston, St. Louis, Anaheim, and the Yankees. It sounds ridiculous, but the Yankees have an opening at first base and could bring in Lowell, who would make the Yankees a lot better. He could play first base, which might extend his career some, and it would hit the Red Sox hard, who would then have to either trade for something, or settle for something much less the Lowell. I'm sure a deal would be a four year deal, worth about 60 million to get him to come to New York and play first base.